I worked in the film industry as a freelancer for 10 years before I bought my own production company. I finally directed my first commercial in 2005. In all that time I never once worked with a woman director. I had to buy a company to get my break as a director.

I have figured out a way to help female filmmakers see what it looks like to direct. And it is actually really easy. I started a job shadow program and have been astonished by how small a sacrifice it is and more importantly, how big of an impact it can have.

I have now worked in the industry for over 20 years. I started as a PA (production assistant) and worked my way up the ladder. I worked many positions; production coordinator, production manager, location scout/manager, assistant director (AD), producer and finally lead producer. I worked on all types of projects; commercials, TV series, feature films, documentaries and independent films. In all of those years, hundreds of projects, I never once worked with a woman director.

I did not realize how this affected me. I frequently said these words, “I will never direct”. It was a knee jerk reaction to a question I was asked many times throughout my early career. Do you want to direct?

Why was I so quick to say never? Was it because I lacked confidence? I didn’t feel like I could visualize the project to completion? I did not believe I was “creative” enough? I did not want to be responsible for running a set?  Was I too intimidated by the very idea to think I could do it? Or could it possibly have been because I had never seen or experienced a woman in the director’s role?

I am very happy to say that I did have some very supportive male mentors. Around 1998 the owner of the company I worked for as lead producer, Walt Dimick, an amazing director himself, asked me if I would be interested in buying his company. He said something to me that I will never forget. He said, “I think you can do it, I believe my company that I built for 20 years will be in great hands with you.” I was flattered and I did some soul searching. I realized that I believed in myself as well and I was ready to take a risk. I was 34.

So now I had a commercial production company. I was representing several directors, all male. Along the way I determined that it was very important for me to represent female directors as well. And guess what, I couldn’t find any. 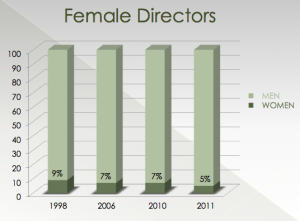 It turns out that in 1995 it was estimated that women compromised 9% of all directors for feature films, independent films, documentaries and commercials. Even more shockingly, today that number is around 5%.

Ok, I thought. Now what? I decided that it was time to get busy and quit saying never. So I directed my first spot in 2005. It was a PSA for the Oregon Symphony. We set up an orchestra in downtown Portland at one of our most public places, Waterfront Park. It involved 30+ musicians and a complicated crane shot. I did it! I pulled it off and it is a spot I am very proud to call my first as a director.

Now, what can YOU do to help change the imbalance of females in traditionally male dominated roles? I’ll tell you what, start a job-shadow program!

As I mentioned I never saw what it looked like to be on set with a woman director. Was there a difference? If there aren’t many women directors, how am I going to be able to get projects? What is it like for a woman to run a typically male dominated set? I had so many questions.

How to maintain my personality and also be a successful leader? I had been told repeatedly that the only way to run a set as a woman, is to be a bitch. Well, guess what? I’m not a bitch. Thankfully, I never believed it.

So how much better would it have been if I had seen other women direct? To see that they all have different styles. You know what, some of them probably are bitches. But you know what else? Many male directors are bastards. These issues are all about style. What one person needs to do to succeed on set is very different from another be it male or female. The problem is, I never saw anything but one gender, so I never really thought it would be an option for me.

Well it is an option. Since that first PSA I have directed award-winning projects for many clients, including Nintendo, RockBand, Banfield Pet Hospital and others.

I realized along the way that just talking about there being more women directors simply was not enough. I needed to do something. So I started a job shadow program.

The program is very grass roots. Knowing how busy I am and how busy most people are, I decided to keep it simple. I created an application for the program, which I gave to several colleges and universities in Oregon, all of which have film studies and similar majors. Specifically I have had a great deal of success with the University of Oregon who has an excellent, and fairly new films studies program.

The female student with the most compelling application is chosen. She is allowed to follow me through the process, but only as an observer. She attends one pre-production meeting. She is on the shoot with me from the moment I arrive, until I leave each night. And she joins me for one post-production session. At the end of each set day I give her 10-15 minutes to ask questions for the day. And at the end of her last session, I join her for a 30-45 minute debrief meeting where she can ask questions about the whole project.

So, does it have impact? That is the part that gives me the greatest satisfaction.

It can have a HUGE impact.

Here is a quote from one of my job shadow students:

“The Job Shadow Program was an amazing experience and opportunity for me. It has helped me better understand the world of filmmaking and it gave me a resource to ask any questions that I may have along the way to entering this industry. More importantly, Juliana has showed me what a great director looks and acts like, and that my goal of becoming a director is possible.” -Felicia Mauna, 2014 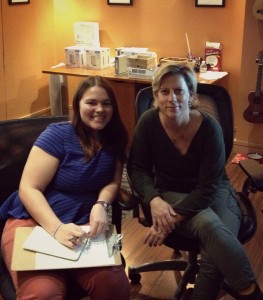 She also told her advisor that it was the best experience she had as a part of her ongoing education. This program had a huge impact on her, and it took me a total of 1 ½ hours. Yes, you head me right, 1 ½ hours! Because she shadows me for activities that I am already doing, the time commitment is small. And I will tell you who the biggest winner in all this was. Well, truthfully, it was me. I have been inspired by these young filmmakers who are so passionate and just want to know what it looks like to be a director.

My call to action to ALL women currently holding positions in typically male-dominated fields? Don’t wait. Start a job-shadow program NOW. You will be amazed at the impact it will have on young women who simply need to see what it looks like so that they can gain the confidence to be it.